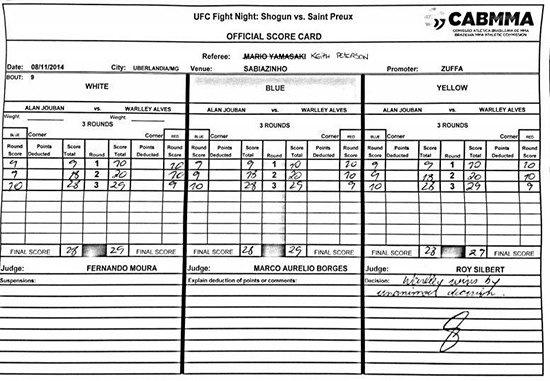 There is a saying in mixed martial arts that instructs the fighters to never let the decision of the fight go in the hands of the judges. Even though they were close to the action, judges have a reputation of watching a completely different fight than what is going on in the octagon or ring.

The judges scoring Alan Jouban and Warlley Alves’ fight on Saturday night at “UFC Fight Night 56” lived up to that reputation.

The culprits have been revealed! The individuals who scored the fight in favor of Warlley Alves rather than Alan Jouban are Marcos Borges and Fernando Moura of Brazil and Roy Silbert of the United States of America.

Silbert has been scoring fights regularly for the Ultimate Fighting Championship since 2008 and does not have a bad history of scoring fights (according to MMADecisons). He is consistent in agreeing with his fellow judges and apparently only has two split decisions in his UFC judging history.

Fernando Moura and Marcos Borges have only judged UFC fights out of Brazil.

What do you guys think? Did they call the fight in favor of Alves simply because he is from Brazil or was he the rightful winner?