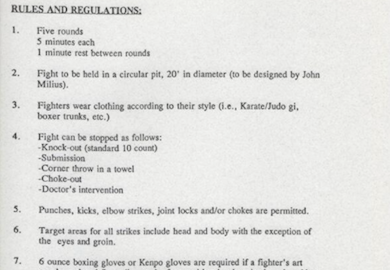 On November 12, 1993, The Ultimate Fighting Championship was born.

Dubbed as a ‘No Rules’ event, both athletes and event promoters recognized the need for certain obvious items to be stated when it came to competition. (No eye-gauging or biting for example.)

Still though, UFC 1 was the most liberating fighting tournament ever put on inside the U.S. and it birthed today’s modern version of Mixed Martial Arts.

Through twitter, the original boss of the UFC, Campbell McLaren passed down some history and shared the original rules sheet from UFC 1.

First UFC rules meeting Rorion Gracie stood and said "There is no biting. We are men not animals." Then he sat down. #originalUFC #Combate