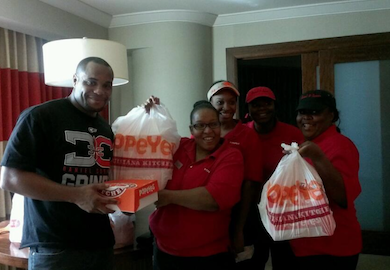 Newly turned light-heavyweight fighter, Daniel Cormier, has never shied away from his love for Popeyes Chicken.

His love for that cajun rice almost caused his cancellation of the UFC 170 co-main event, which is why this post seems so sweet for the top ranked D.C.

AKA’s Cormier took to twitter following his quick finish of Pat Cummins last weekend to show off his post-fight reward.

Look who just showed up. @PopeyesChicken nice haha now we have a party. DC pic.twitter.com/X6hIbObUCo