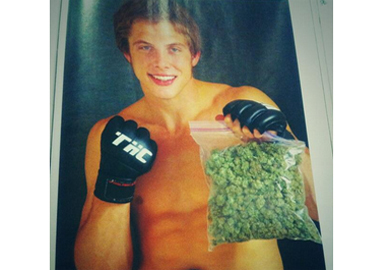 Mixed Martial Artist and Season 7 ‘TUF’ competitor, Matt Riddle, was released from the UFC back in February of 2013 after testing positive for marijuana in a post-fight drug test following his performance on the UFC on FUEL 7 card.  Riddle spoke out, saying, “I got fired over taking my medicine because I don’t want to take pharmaceutical drugs or testosterone”.

Following the failed drug test, the UFC told Riddle if he won a couple of fights and passed a couple of drugs tests that he would be “getting a call back”. In an exclusive interview with BJPenn.com, Riddle admitted that at that point, he was just going to do his own thing.

Four days ago, High Times Magazine released a picture on Twitter of Matt Riddle posing in their magazine, brandishing a big bag of weed and proudly sporting 4oz. gloves that read “THC”.  The Riddle edition is expected to be released in March and is reportedly said to cover everything from Riddle’s notorious falling out with the UFC, to his current training regimen.