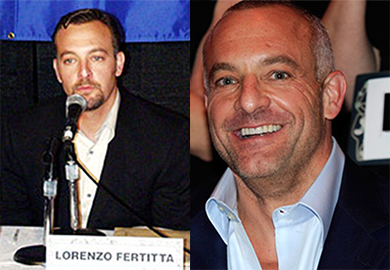 In the latest edition of our ‘Then & Now’ series we bring you UFC CEO Lorenzo Fertitta.

Lorenzo Fertitta is the man responsible for buying and bringing the UFC/MMA into the modernized sport we enjoy today.

As the story goes, in 2001, Dana White approached his childhood friend (Lorenzo) with an investment opportunity to buy the UFC. He bit and closed the deal within a month and the rest is history.

With his brother Frank, the Fertittas opened up ZUFFA LLC to manage and operate The Ultimate Fighting Championship and they, along with Dana White, have continued to build up one of the largest sports franchises in the world today.

As seen in the photo above, Lorenzo has been at it a long time. In the first picture we show him as he was when the UFC started and in the latter, we show a recent pic.

Have the years served him well?

Want to see our ‘Then & Now’ on Arianny Celeste? Click HERE.