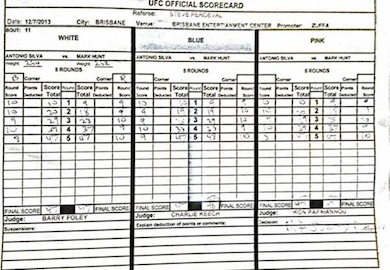 Last Night’s UFC Fight Night 33 main event between Mark Hunt and Antonio ‘Bigfoot’ Silva will go down in the record books as one of the best heavyweight fights of all-time.

After five complete rounds judges saw it as a draw.

It was close, personally I gave it 3 rounds to 2 for ‘Bigfoot’ but the judges scorecards have been released, which show how they derived at a draw.