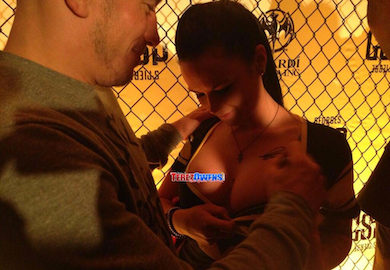 The sidelines are fun for the former champ, Georges St-Pierre.

Since his UFC exodus, we’ve seen him partying in Miami, training in NY and hanging in Brazil while keeping his brand in-tact and enjoying his much-needed escape from the UFC’s grasp.

In the photo, we have just the latest in the life of the former champ. While attending a party thrown by Bacardi, Terez Owens caught GSP signing some breasts! WOW!