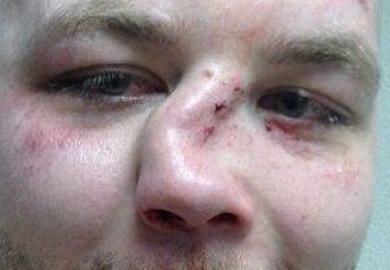 A broken nose is unfortunately a common occurrence in combat sports, however, certain instances can prove far worse than others.

This was definitely the case when Andy Eichholz took on Wade Sauer at the “Full Nelson Productions: Let ‘Er Buck” event in Pendleton, Oregon.

“Ice Cold” Eichholz was on the receiving-end of what appears to have been a devastating knockout courtesy of his opponent Sauer, as you can see below: (Photo courtesy of mixedmartialarts.com) This photo brings back memories of when Rich Franklin lost his UFC middleweight championship to Anderson “The Spider” Silva. Hopefully “Ice Cold” will be able to straighten things out after this recent loss.