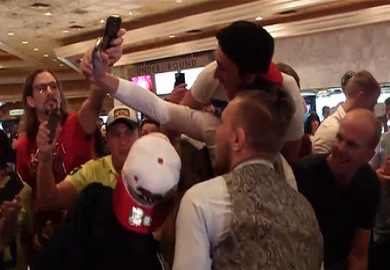 During the Jon Jones Daniel Cormier brawl earlier today tension was running high for most people, for Conor McGregor however it wasn’t. The outspoken UFC fighter can be seen taking selfies with fans during the brawl and smiling.

BIGGEST THING TO HAPPEN IN @UFC MEDIA DAY HISTORY…. yet still all the fans want is @TheNotoriousMMA #UFC178 #UFC pic.twitter.com/HXFiYJHSFC