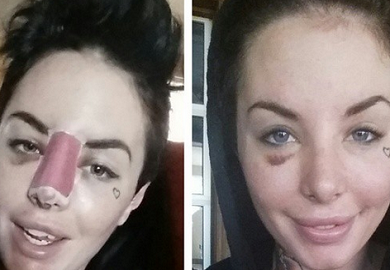 In August news broke that former Bellator MMA fighter War Machine had brutally beaten his ex-girlfriend, Christy Mack, leaving her with broken ribs, a fractured orbital, ruptured liver, broken nose, and several other injuries (Read about that HERE). War Machine insisted his innocence, and as a result, went on the run, prompting Dog The Bounty Hunter himself to go after War Machine (Read about that HERE). War Machine was eventually caught by police, and extradited to Las Vegas where he currently awaits trial, and insists Mack got what she deserved, according to a letter he sent to a friend, which you can read HERE.

Christy Mack has had to undergo several surgeries to repair the damage, and posted the following update to her official Instagram for her fans.

Sometimes half of your temp teeth decide to fall out to match the rest of your face. Thanks to Dr. Motykie for fixing the damage to my nose, and Dr. Adam Lousignont of Las Vegas for the temp tooth fix… again. Left was Monday right is today. What a difference a few days makes! I'm starting to breathe out of my nose again and today I'm going to get my glasses. One day soon I'll be going to New York to see Dr. Toscano and get my permanent teeth.