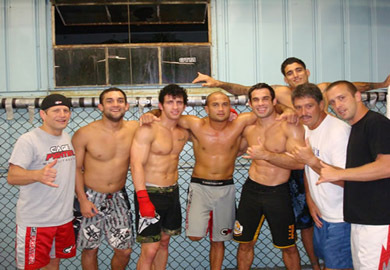 In this photo, if you look two men to the right of BJ Penn you will see an un-bearded Johny Hendricks inside the Penn Training And Fitness Center cage in Hilo, HI.

At the time, Penn was preparing for his UFC 84 title defense against Sean Sherk and brought in Hendricks to help him get ready for the fight.

Johny had just recently started his career in MMA and at the time was just 3-0 as a pro-fighter.

Fast forward five-years and Johny Hendricks is now the number-one contender to the welterweight title once held by BJ and Penn, according to many critics, is on the down-side of his career.