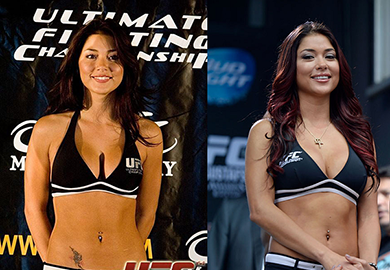 Arianny Celeste made her UFC debut back in 2006 at The Hard Rock Hotel & Casino in Las Vegas. It didn’t take long for her to win the hearts of UFC fans across the nation after strutting her stuff around the octagon and appearing in magazines, including Sports Illustrated and Playboy.

Since making her first appearance eight years ago, Celeste has appeared to have changed her look quite a bit! After her eight year tenure with the promotion, Celeste has gone from a 21-year-old ring card girl novice to a 28-year-old pro.

Have the years done her well? We think so!

This is part one of BJPENN.COM’s new then and now series. Stay tuned for part two!