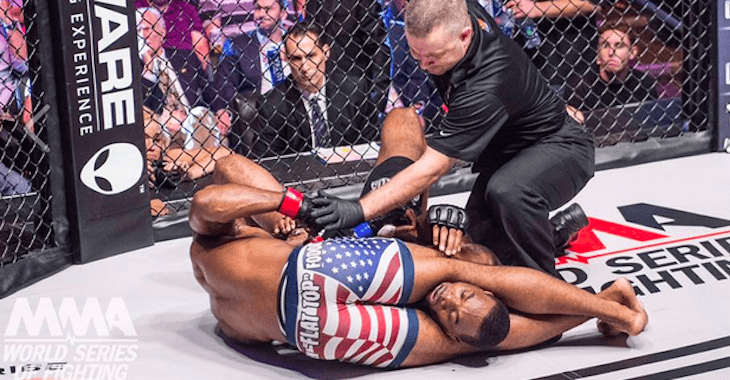 Ben “Phoenix Jones” Fodor walked into the decagon at “WSOF 23: Gaethje vs. Palomino II” on Friday night knowing his career could change drastically if he suffered another loss. The super-hero turned World Series of Fighting athlete found little success in his first outing and needed a big win for job security. Not only did he get a big win, but it was in fantastic fashion as well.

“Ali came to me and said, ‘Look, we’re paying you a lot of money. You didn’t win the first one. If you don’t win this one, we’re not going to cut you, but you’re going to have to take along break before you come back,’” Fodor told MMA Junkie. “I was like, ‘So basically, I need to win this fight or my career is on a lot of trouble.’”

Fodor took some punishment early on but eventually found himself in an advantageous position when he took the fight to the ground. “At the time of it, I was thinking, ‘Am I seriously going to get the neck scissors right now? I’m going to get him with a pro wrestling Iron Sheik. I’m going to do it.’” Fodor is referring to the former World Wrestling Federation wrestler The Iron Sheik who utilized the body scissors as one of his signature moves to make the crowd irate.

Fodor went on to explain his mindset while locking in the rare leg scissor submission hold. “It’s an old-school pro-wrestling move, but it works really well with the kimura. So you’re hitting the kimura, and if the guy tries to roll to the left to block himself, your leg ends up one leg on the front and one leg on the back of his neck. It blocks out the carotid arteries, and you can shut him down.”

“But normally when you’re squeezing, a person will turn back up, and you’ll end up with the kimura,” Fodor explained. “I had the kimura in so tight he couldn’t turn. Then I saw that maybe he wasn’t going to quit, so I hit him in the stomach, and he let the air out. And when he went **gasp**, I clamped it again, and then I knew he was in trouble. Once you let the air out, you can’t fight a choke with no air.”

As expected, Roberto Yong was forced to submit within seconds after letting the last bit of air out of his lungs. Do you expect Fodor to make it big in the world of mixed martial arts? Share your thoughts in the comment section below!