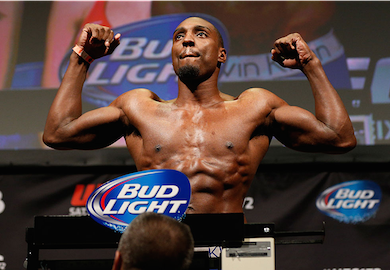 Earlier this month Phil Davis signed the contract to fight Glover Teixeira at UFC 179, and while he is looking forward to getting a fight against the former title challenger, Davis admitted that he is a bit worried about biased judging.

“I think it’s a great match up,” Davis told Sumbission Radio. “He’s obviously Brazilian, the fans seem really like me down in Brazil after I’m done fighting. So you know, it should work out well. Another trip down to Brazil, another chance to have an awesome performance down there. The fans down there are absolutely fanatical about MMA so I’m just excited about the match up, the venue, the fight, (being in the) co-main, everything. Should be a great opportunity to put myself back in the title hunt.”

“But, you known at some point I gotta give these guys a little bit of credit because they come over to America and they fight, and you very seldom hear them complain.

“Now having said that, yeah there’s a little bit of a home field advantage and I acknowledge that, but at the same time I’m ready to scrap.”