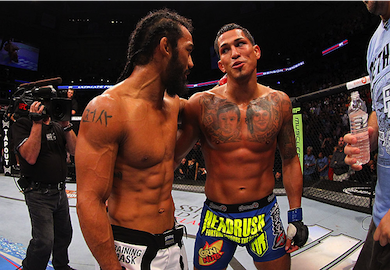 Anthony “Showtime” Pettis (17-2 MMA, 4-1 UFC) was able to pull off a slick first-round submission victory over Benson Henderson at August’s UFC 164 event in Milwaukee, to claim the UFC’s lightweight title.

The dominant victory showed that Pettis is every bit as dangerous on the ground, as he is on his feet. Submitting a Brazilian jiu-jitsu black belt like Benson Henderson is no easy task, in fact, it marked only the second time that “Bendo” had been stopped in his career.

Even more impressive is that Pettis separated his shoulder two weeks prior to his championship fight against “Smooth” and still managed to dethrone the champ.

Pettis revealed his injury during a recent appearance on “The MMA Hour”:

After earning the championship victory in his hometown of Milwaukee, “Showtime” revealed that he had sufffered a knee injury; however, no surgery will be required to correct the issue.

Pettis is slated to defend his title against Josh Thomson (20-5 MMA, 3-1 UFC) at December’s UFC on FOX 9 event.

UFC on FOX 9 takes place December 14 live from the Sleep Train Arena (formerly ARCO Arena) in Sacramento, California. Pettis vs. Thomson will serve as the events headliner which airs live on FOX.