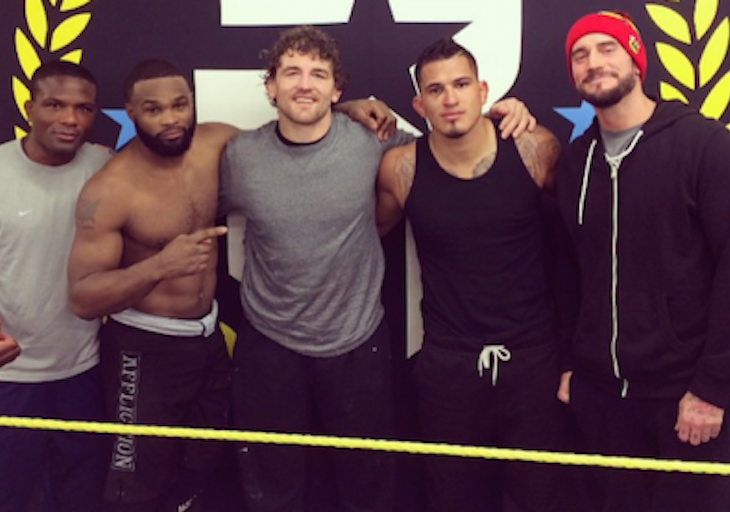 CM Punk has been training at Roufusport in Milwaukee for a week now, and everyone is saying great things about the new partnership between Punk and the Roufusport team.

Earlier in the week Punk and Roufus appeared on Inside MMA to speak to Bas Rutten and Kenny Rice about how things are going (See that HERE).

Now, lightweight champion Anthony Pettis is sounding off on how Punk has been doing.

“He hasn’t trained with the team yet. He’s doing private lessons with Duke and my jiu-jitsu coach. We don’t want to scare him away. But I’m not discrediting him because he’s definitely a great athlete. It’s just when it comes to MMA you’ve got to put it all together. His striking is going to need some improvement. His jiu-jitsu is getting improvement. He’s going to get improvement everywhere with the team, but we just want to take it slow, and he agrees.”

“That’s the cool thing about him. He said, ‘I’m not coming in with any ego. I want you to tell me when I’m ready. And when you guys think I’m ready, that’s when I’m ready.’ That shows me that he’s going to do great in the sport.

“Knowing the following he has, he’s very modest. He is a very cool guy. He’s down to earth, and he didn’t come in with an ego at all into the gym. I think we have a great relationship right away. He’s asking questions and advice on training. He wants to do it, so that’s great. The first step is wanting to do it, and now he’s putting it all together.”