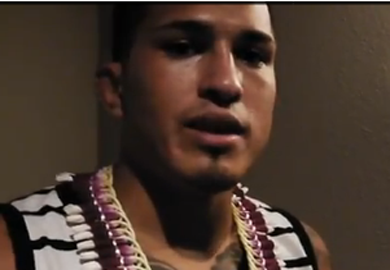 “He’s good where I’m good — he likes to stand, trade and bang, and I feel like I’m more well-rounded and can offer him a big challenge…. Aldo is a tougher fight [than Ben Henderson] … that’s why I asked for it. He’s going through opponents like crazy. He just beat the last 155-pound champion. I think, for me, Aldo is definitely the tougher challenge. I already beat Ben Henderson once and I think I’m going to be doing it again soon. But, I think Aldo is the guy who is on the radar.”

“It’s been something I’ve been thinking about for awhile now. I can make the weight easily. The reason why I haven’t done it before was Erik Koch — he’s a teammate of mine who was right up there for a title shot, so, I don’t want to cross paths with him so I pushed that back a little bit. But, after being at the fights, I thought it was the right idea to call out Aldo — he’s at the top of the division and he’s probably one of the best guys in the 145 to 155 pounds range. So, or me, it was just wanting to fight the best. It’s been awhile since [I last weighed 145 pounds]. Getting down to 155 was kind of hard for me until I got on a clean diet. It’s becoming a lot easier — my last fight I went into the hot tub for two minute and made weight.”