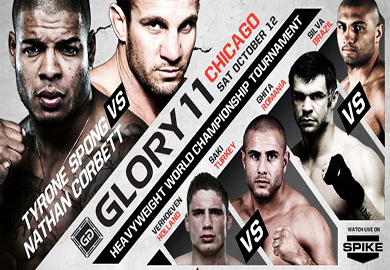 (Verhoeven, bottom, center, in poster for Glory 11 in NYC)

Kickboxing legend, Peter Aerts (105-31-1) will be retiring from the sport following an upcoming bout with Glory heavyweight champion, Rico Verhoeven (42-7-1) at Glory 13 in Tokyo, Japan.

Aerts is three-time K-1 Grand Prix champion and has won multiple titles across various organizations. He is the last man to defeat fellow heavyweight legend, Semmy Schilt marking Schilt only defeat in the almost four years.

Verhoeven also avenged a bitter loss back in June, when he defatted Errol Zimmerman by unanimous decision.