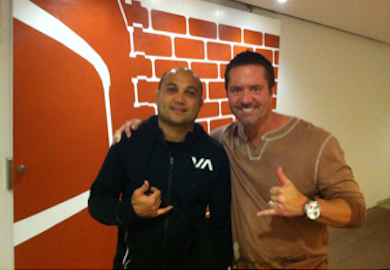 Closet ‘Prodigy’ fan, and UFC commentator, Mike Goldberg had never been to a UFC event as a fan until this past Sunday.

For ‘Goldie’, fight-time is usually when he clocks in and get his best work done. But last weekend was different, after 17 years with the company, the UFC’s color commentator finally got to see an event from the fans perspective, and it was Penn vs. Edgar III.

In a recent interview with MMAWeekly.com, he explained:

“It was good. It was fun to not have the headset on and kind of hear the people in the stands. There are a lot of coaches in the stands. It is kind of funny, a lot of people barking instructions at the fighters.”

“It was fun. It was enjoyable. I wish the main event would have been more of a back-and-forth battle – both guys are (future) Hall-of-Famers… I do not want to become a fan. I want to keep announcing. I love this sport. It was a great opportunity, very rare to have back-to-back events. But if I’m coming, I want to put my suit on and my headset.”