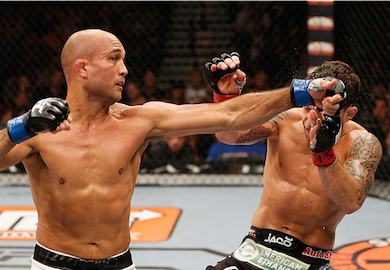 “I would never in a million years develop that new style. Never in a million years.I got called a week before the fight to work his corner for the fight, so I, myself, hadn’t spent time in camp at all with B.J. … I answered yes [to cornering him] automatically because he’s my friend. So I didn’t know. They explained to me kind of the gameplan the week of the fight, and I was actually rooming with his boxing coach the whole week, so I was listening to him, talking to him about what they were doing. At that point, it’s not my position to make any adjustments, like, ‘no, no, no, let’s do this, let’s do that,’ because it’s too late for that. It’s too late. He’s been doing this shit for two years. What, am I going to come in the week of the fight and change a whole gameplan? Change a whole style around? That’s not going to happen, nor does B.J. want me to make that happen. He doesn’t want that to happen, he wants to go in there with what they have planned.”

Popular striking coach and longtime staple of the BJ Penn camp, Jason Parillo recently took to ‘The MMA Hour’ to, pretty much (according to him), defend his honor in the wake of Penn vs. Edgar 3.

Parillo went on to say that he will always be behind Penn, which is why he took the cornerman gig to begin with.

The former boxer said that all he wanted to do was clear the air for the people who blame him on what is widely considered a failed fighting strategy.