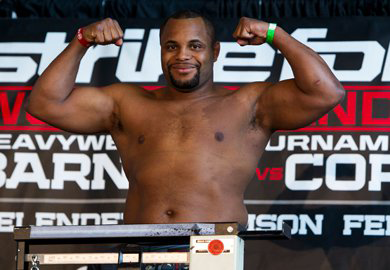 This Saturday at UFC 170 Daniel Cormier will make his light-heavyweight debut against Patrick Cummins. Cormier was scheduled to fight top light-heavyweight Rashad Evans, but due to a last-minute injury he will instead fight Cummins, former coffee shop barista turned UFC fighter.

The choice of Cummins as the replacement was questioned by some, including Ben Askren. Askren was set free by Bellator and had hopes of joining the UFC. Unfortunately for him it seems that hope is all it was. Dana White made it clear that he didn’t think Askren was ready for the level of competition in the UFC and would not be signed. Now Askren is under the ONE FC banner but can’t quite understand why someone like Cummins is now fighting in the co-main event this Saturday after only having 4 fights.

In a recent interview with USA Today, Cummins responded to Askren’s comments and also took a shot at his upcoming opponent.

“I get it, Ben Askren is a little sore about the whole, ‘Hey, how come I’m not the guy? I’m the decorated wrestler here, what’s the deal?'” said Cummins. “I know that to a lot of people, one wrestler is the same as another, but that’s not the case. I’m not out there looking to grab an ankle and roll around and get all funky. That’s not my style of wrestling.

“My style of wrestling is explosive, in your face and I want to exploit the conditioning issue as much as possible. That’s what you want, you want to see two guys pushing, leaving it all out there. And I think that’s what I bring. Ben Askren is more of a, ‘I’m going to play the chess game to win,’ and I’m going for broke. I’m getting after it hard. I mean, maybe that doesn’t come across in the four fights that they’ve seen, but, I got four finishes in four fights all in the first round. I think that says something.”

“His weakness is mental,” said Cummins. “A guy comes out there, doesn’t make weight for the Olympics. I mean, c’mon guys, that is about as mental of an issue as you can get.”