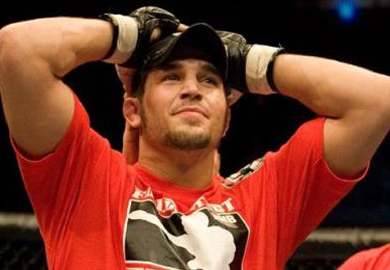 “It’s very complicated to fight [Anderson Silva] because you never know what’s going to happen or what he’s going to do. We saw what he did Saturday night. Once again he did something new. He was staying against the fence and he was playing with Bonnar. Bonnar is no joke. Bonnar is a good fighter. He’s tough. He’s durable, and [Silva] was playing with him like a little kid… It’s hard to explain how to fight him, because if you go forward, he’s behind you. You try to hit him, and he’s not there. It’s very, very weird. It’s hard to hit him very clean with a very powerful shot. That’s why it’s hard to punch him very, very hard, because he’s moving so fast and he’s playing with the angles very, very well… You have to stay on your game plan. It’s very, very hard. I remember [against] me, he was playing with his hands. He was doing some crazy footwork, like the new Bruce Lee or something like that, but I would stay on my game plan, but that was very, very hard for me because I like to go forward. I like to push the pace, but at the time, I knew that was exactly what he wanted. I think he’s very, very confident about himself and he thinks that he’s unbeatable. He thinks that nobody can beat him, nobody can hurt him. Saturday night he received an elbow right in the face. He received a right cross right in his face and he was standing there and he was talking to his cornerman … . He was like, ‘All right, calm down, guys. I know what I’m doing.’ He’s so in control about his game, so in control in his head. That’s why I think he’s so dangerous.”

Cote once fought Silva back in 2008 at UFC 90 where he ultimately lost when his knee blew out and was forced out of the fight in the third round.

At the time, Cote was the only man to make it to round three against Anderson Silva in the UFC.