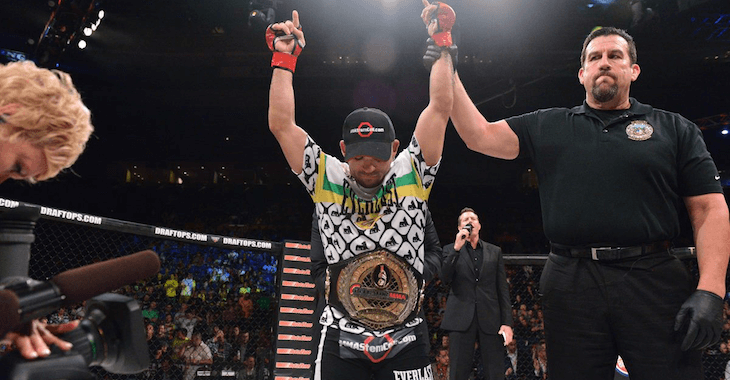 Scott Coker and the officials of Bellator made an interesting matchmaking decision when they booked Daniel Straus to face Patricio “Pitbull” Freire for a third time despite losing the first two bouts. The featherweight championship will be on the line when champion Freire tries to secure his third win over Straus at “Bellator 145” on November 6, 2015.

Freire’s first win over Straus came by way of unanimous decision years ago at Bellator 45 in 2011. Since then, “Pitbull” has gone on a tear and is currently riding a seven fight win streak, one of those wins coming at the expense of Straus again.

While Freire is no doubt puzzled by Bellator’s decision to pit him in a trilogy match with Straus, he acknowledges Straus has improved every time they stepped into the cage together. Straus’ submission win over Henry Corrales in June 2015 was one of his most dominant performances in a long time.

“I saw four names that could have been my next fight,” Freire told MMA Fighting. “(Pat) Curran, who bounced between a loss and a win after I beat him; (Daniel) Straus, who fought me twice and lost; (Daniel) Weichel and (Georgi) Karakhanyan.

“Karakhanyan was getting the next shot, but I believe he’s still injured, so Bellator decided to give Straus the shot. I don’t know if it makes sense, I don’t think it does. I beat him twice, he never beat me. A trilogy bout doesn’t make sense to me. But it’s fine, I’m an employee and I’m here to fight. I just want to fight.”

“His boxing is better, he’s throwing good kicks now, but he forgot his roots, his wrestling,” said the Brazilian. “He won’t want to be submitted this time. He’s going there to try to survive on the ground, and I’m going there to kill him.”

“He evolved between the first and second losses, so he will probably be better this time,” Freire said. “He surprised me with a knockdown, the fight was close, and I submitted him. I heard he’s working on his jiu-jitsu, training with the gi, so he’s trying to evolve. But I’m doing the same. I worked on mistakes I’ve made and I will come back stronger.”

Who do you think will take home the gold? Is this the same situation as Miesha Tate/Ronda Rousey III? Share your thoughts in the comment section below!