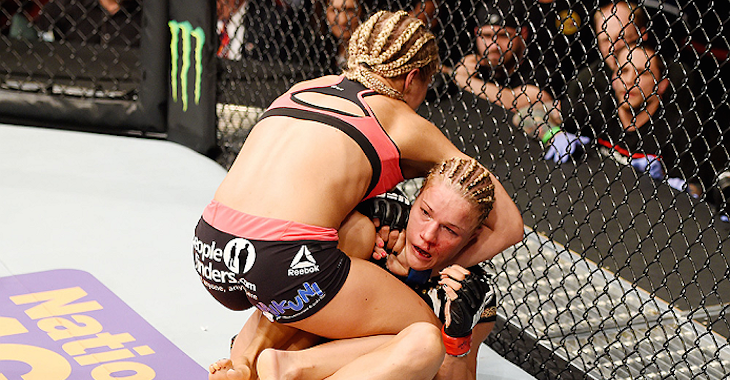 UFC strawweight and all around rising star in MMA, Paige VanZant, is gearing up for her fight with Alex Chambers at UFC 191, which will go down this weekend on Sept. 5.

Ahead of the bout, she spoke with the media and mentioned that she believes there are plenty of women in her division who are using steroids or PEDs. How does she know? The eye test, or smell test as it’s refereed to for some reason. Based on their looks, their physiques, VanZant believes it’s obvious that their bodies are unnatural.

Here’s exactly what she said:

“I will say some of the girls in my weight class have very masculine physiques, and I don’t know if you can get those naturally. I’m not a nutritionist, though, so I don’t really know. But I am happy that USADA is here and implementing the drug-testing policy.”

Do you think it’s fair to call out a fighter because of their physique? It seems like both VanZant and Ronda Rousey have used the eye test to point to female fighters who have ‘masculine’ builds. For instance, Rousey says it’s obvious, in her opinion, that Cyborg is still using because of how she looks.

The Team Alpha Male fighter didn’t give names, just made the broad assumption that those with certain physiques are probably using. Well with the new testing I guess we’ll find out how much looks play a part.
The Best Training Room You’ll Probably Ever See — D.C., Rockhold, Khabib, Velasquez All Training For UFC Greatness
[ooyala code=”J5c3UxdzpDWlYbuxxRyJVVXCUwnYxE3R” player_id=”bd214e34cfad476984102de4bf5e8da2″ width=”1280″ height=”720″ auto=”true”]