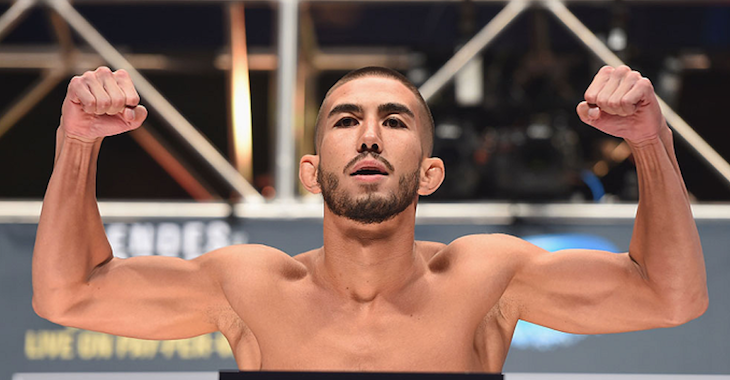 A flyweight bout between Paddy Holohan and Louis Smolka is the latest addition to October’s UFC Fight Night 76 event in Dublin.

Louis Smolka (9-1 MMA) will be looking to extend his current win streak to three in a row when he battles Holohan in Ireland. “Da Last Samurai” was most recently seen in action at July’s UFC 189 event in Las Vegas, where he scored a unanimous decision victory over Neil Seery. Prior to that, the Hawaiian flyweight had scored a knockout victory over Richie Vaculik at last November’s UFC Fight Night 55 event in Australia.

Meanwhile, Paddy Holohan (12-1-1 MMA) has scored two straight wins since suffering the first loss of his MMA career to Chris Kelades in October of 2014. “The Hooligan” was most recently seen in action at July’s UFC Fight Night 72 event in Scotland, where he earned a unanimous decision victory over veteran Vaughan Lee. Eight of the Irishman’s twelve career wins have come by way of submission.

UFC Fight Night 76 takes place October 24 live from 3Arena in Dublin, Ireland. The entire card is expected to air on UFC Fight Pass and the event is headlined by a lightweight bout between Joseph Duffy and Dustin Poirier.