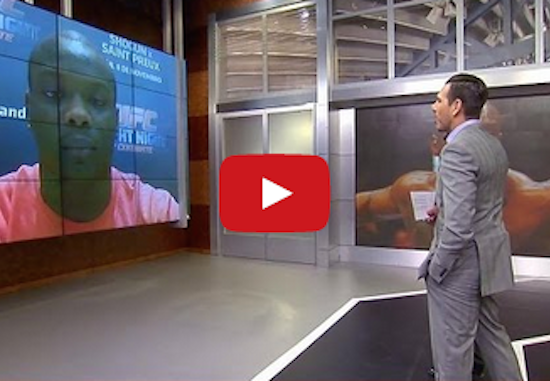 Ovince St. Preux talks about his reaction to facing Shogun Rua, his fighting gameplan and more.

Ovince Saint Preux on getting his fight changed to Shogun Rua: “I thought it was a good matchup for me.”

Saint Preux on what’s different about fighting Shogun: “They fight similar. Both come forward. But Shogun has been in the game so long, he’s lost a step. I’ll be able to capitalize on it.”

Saint Preux on how he’s getting treated in Brazil: “Everyone is cool. I know when get to the stadium it’ll be a little different. I don’t understand Portuguese, so for all I know they’ll be cheering for me.”

Saint Preux on what he changed after losing to Ryan Bader: “When you go on those win streaks, you get complacent. I wasn’t drilling as much as I needed to before the Bader fight. My trainers were getting on me to get in the gym. This time, I was constantly drilling. I went down to spar some guys, and my timing’s on point, my wrestling is looking good and my jiu-jitsu is looking good too.”