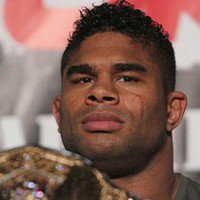 Alistair Overeem has had his share of legal troubles over the past few months and has been a ghost since his suspension from competition due to a failed drug test for elevated levels of testosterone.

Now, the Dutch UFC heavyweight says he plans to come back in December and continue his title hunt against his once-scheduled opponent, Junior dos Santos.

“That’s my goal. I know that the UFC will not promote me on their card as long as I’m not licensed. That being said, we’re going to try to get licensed sooner and I’m confident that I will succeed,” Overeem stated in his recent interview.

Overeem was banned by the Nevada State Athletic Commission (NSAC) back on December 27th, 2011 after being pulled for a random drug screening before UFC 146, and has since moved to Florida to train and states that he is settled in and improving:

“The last few months have actually been calm media-wise, which was good. I moved to Miami. I’m full-time here now and I got all settled there. I’m still training, always training, always improving my game,”

Overeem will be looking for a statement win in his next fight, though no opponent has been announced yet.

For the latest news on UFC and MMA, stay tuned to BJPENN.com