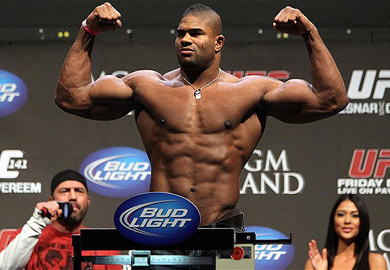 “Dana’s a very upfront character. I like that about him, I like to know where I’m at. He’s entitled to his opinion, as we all are. Do i think it’s fair? I think it was a very technical performance. It is what it is. I can’t make more of it now. I can understand him, he’s a promoter, he wants to have exciting fights. Ratings matter, fans matter, fans want exciting fights. That is important. I hope he also understands my position. I mean, of course I’m fighting in a loser leaves town match, so of course, for me, and also since the Travis fight, that has been a factor, a lot of things about my cardio. Sometimes, in life, you don’t always get what you want. Of course, I’d rather had punched him out in one minute, but then, I would have gotten, ‘Yeah, but he can’t last three rounds.’ Then maybe I wouldn’t have learned my lesson from the Travis fight.”

“Listen, I’m still that guy that wants to knock people’s head off. But it is important to have that switch. Sometimes it’s not possible. You can want it as hard as you want, and if I look at my history, my last fight, that was my downfall, going for that knockout. So, it’s logical and I hope that viewers back home and everybody watching can understand that.”

During today’s episode of ‘The MMA Hour’ UFC heavyweight, Alistair Overeem, addressed the recent criticism from Dana White and talked about his cautious game plan for his UFC 169 bout against Frank Mir.