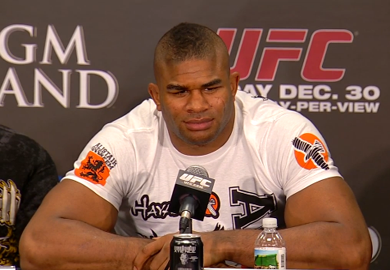 Alistair Overeem and Travis Browne are set to duke it out in the co main-event of UFC Fight Night this Saturday in Boston, Massachusetts. As the UFC makes their debut on Fox Sports 1, Overeem is in a position where, with a decisive victory, he can earn another shot at the UFC Heavyweight Championship.

The moment he signed a contract with Zuffa, Alistair Overeem was touted by many as the new “Baddest Man on the Planet”. His debut at UFC 141 showed that he may have deserved that nickname all along, when he defeated Brock Lesnar by technical knockout in the very first round. It was announced short-after that “The Reem” would be the next contender for Junior Dos Santos’ championship.

A failed drug test would force Dana White to pull Alistair Overeem from that title bout and replace him with Frank Mir. Overeem’s stock was only temporarily damaged, however, as he returned to the octagon to face Antonio Silva at UFC 156. Silva was overlooked by many as a viable opponent, and it was assumed that Overeem would win the fight without an issue.

Despite being a -440 favorite and having won the first two rounds, Overeem was on the receiving end of a devastating combo that left him looking up at the lights and Antonio “Bigfoot” Silva roaring over him, with his hands raised. Overeem underestimated and overlooked his opponent and suffered a third round loss.

In a recent interview with MMAMania, Overeem is looking to simply walk away with his hands raised, this time.

“For me I’ve just been really focused on my own development. I was recovering from an injury and getting back on track. I made a lot of changes in the camp, the preparations and the whole process. For me, I’ve just been focusing on myself and for me just to get that win I put a 100 percent effort into that and my preparation. It’s up to the gentlemen of the UFC to decide what they are going to do next.”