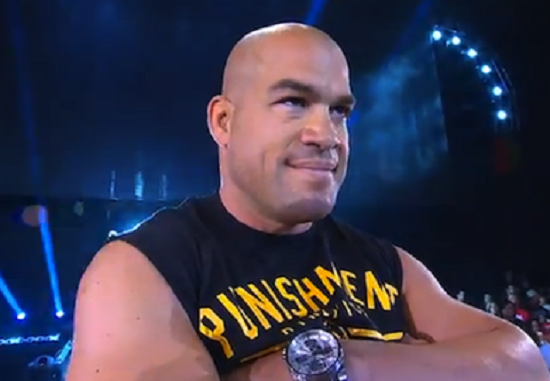 The feud continues between Tito Ortiz and King Mo.

Following Ortiz win over Stephan Bonnar at Bellator 131, and King Mo’s win over Joe Vedepo on the same card, King Mo began calling out Ortiz, saying that he would ‘Django’ Tito (See that HERE).

Then the pair took their beef to Twitter, with both men throwing verbal shots at one another (See that HERE).

Now Ortiz is explaining why he doesn’t want to fight Mo.

He spoke to Submission Radio.

“I have two more fights left on my contract and I think King Mo is just stepping down in my career of fighting somebody, I want to fight somebody with opportunity to fight for a world title. Why would I fight somebody like King Mo? I mean, there’s no reason to it. It just doesn’t make any sense. I have an opportunity to fight someone like Rampage Jackson who beat King Mo. Why would I waste my two fights on somebody who doesn’t make any sense?”

“It’s a lose/lose situation. If I beat him, I’m supposed to beat him. I lose to him, look I lost to King Mo. It’s a dumb fight. The guy is a nonsense fighter, he’s a journeyman. It doesn’t really matter. I don’t want to talk trash on King Mo.”

“You know King Mo was a good fighter in his time and you know right now with him; just saying the things he says about me during the press conference, I was just scratching my head. I’m like, how far back have we gone back in history now? I mean he just talks like a street hood rat. This guy just didn’t make sense to me. And I kind of understood after I looked at the pay checks where he got 10,000 dollars for fighting, and so then you understand why. For him to get paid is to fight someone like me, and I’ve worked too hard in my career. Let him beat somebody great and then he can come in and fight me, but until then, I want to win the world title.”

Do you want to see Ortiz and King Mo fight? Or would you rather see Ortiz fight Rampage Jackson? Sound off in the comments section!