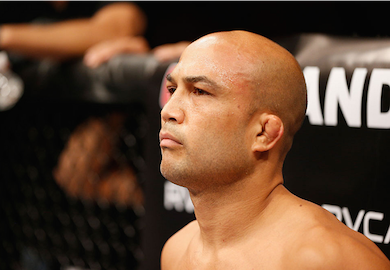 It’s been exactly one month since we saw The Prodigy “SCRAP” for the last time inside the famed UFC octagon, that same octagon in which he helped build. The fight, Penn’s third battle against fellow former UFC lightweight champion Frankie Edgar, was what many are calling his worst performance to-date. And for the first time since that night, BJ Penn is talking to the media about his last fight as a prize-fighter.

BJPENN.COM: We haven’t really heard from you in a month, so just tell the fans what you’ve been up during the first month of retirement:

BJ Penn: “I’ve just been hanging out at home, hanging out on the big island, enjoying time with the family and just kind of putting everything into perspective.”

We know the fight didn’t go your way, but outside of that, what goes on in your mind following a life-changing decision like retirement?

“I wanted to come back and do around 5 fights but, you know, everything got cut short, so…”

“I’m the kind of guy that can keep himself busy. I don’t like to just sit around the house and do nothing. I love working, I love staying busy. I’ve just been trying to focus on what’s best for the website and focus on what’s next for all the gyms I got coming up.”

What is your opinion on how the fight went down?

“I went to show up and do my best job and things didn’t go my way. Hats off to Frankie Edgar; he fought a great fight. I went in there and I gave it my best effort, you know, and everything ended up the way it did.”

A lot of fans and media members have questioned the physical appearance of BJ Penn on fight night and have started formulating their own opinions about how healthy BJ really was heading into that fight.

What are your thoughts on that? Did we see BJ Penn at his best that night?

“Every time I step into the octagon I definitely plan on giving my best effort no matter what the circumstances are. If people didn’t think that I looked good that night then that’s just their opinion and their entitled to it.”

What was the game plan heading into the fight and what was the main cause or purpose of the differentiated fighting style that you incorporated that night?

“That boxing style, I’ve been using that for the past year and a half, two years, and we had a bunch of training partners come in and I did well with everybody.”

“The first training partners we brought in were Lowen Tynanes; the current ONE FC Champ, Russell Doane came in and then, after that, Dominick Cruz came in. After Dominick Cruz came in Nik Lentz came in, Mirsad Bektic and Nik Lentz came in together, and we had great success with everybody in training and sparring. You know, when you do something new you’re rewarded if you win and you’re criticized when you lose. I know that’s part of the game.”

“As far as how we were doing in training, using the style that we used in the fight, we were doing great. We had no problems training with anybody. There was nobody that just came in and wiped us out or anything like that, so, you know? That’s about all I can say about that.”

So if everything was looking good in camp and you seemed to be firing on all cylinders, what was the difference from then to fight night? Was it mental? Was it something that wasn’t right?

“Being a competitor myself I just have to take my hat off to Frankie, you know? He did a good job that evening.”

In hindsight was going down to featherweight the wrong move to make?

“I keep going back about a lot of things…was it even smart to go down to 145 pounds in the first place? Were you going to have the energy all sucked out, you know? I haven’t been to 145 in about 18 years but besides that this whole last year of my life I’ve been just hanging around 160 pounds, trying to watch my weight after the Rory MacDonald fight. I just wanted to watch my weight for general health for myself and my family, and I just stayed around 160 pounds. So, you know, that’s what I sparred at, I sparred at that weight, at 158 pounds, so, you know, that’s just how it all went down.”

How was the weight cut specifically?  How did it all go as a whole?

What was your overall experience in working with Mike Dolce for the weight cut and nutrition?

“As far as Mike Dolce goes; I would never hire him again for anything.”

The subject quickly shifted and BJ was then asked the golden question that many fans have been pondering for the last month:

BJ, are you going to stay retired?

“I think I should stay retired. One thing I know is that I put a lot of effort, a lot of energy into this camp. I trained for the last year to do this camp, to do this fight, and one thing at my age…I love training, I was looking to do five fights, but now that I look back and I’ve fought the last four or five times without any reward and staying in training camps and waiting for all these young kids to come in and spar with me; the Dominick Cruzes, the Nik Lentzes. You know? I just sit around for hours on end waiting for them to come in and spar with me and punch me in my face. And not that I don’t hold my own but I’m getting very burnt-out, very exhausted, and very discouraged to not have my hand raised, to not have a smile on my face after the fight, and it’s been a long road and a long fight. If you saw me spar in the gym or workout with any of these guys you would say, ‘man, this guy should be fighting everybody.’ But after the last few fights I’m kind of getting tired.”

Is there anything specific that you can attribute to you putting together these great camps and then falling short come fight night?

“The famous saying goes, if we didn’t have bad luck we’d have none at all.”

“I don’t know what it is. I know I can still fight with these guys but I’m not going to sit here and tell everybody…”

Does age ever cross your mind as the reason for you losing fights?

Without a doubt. I wouldn’t say it’s just the age or the number, that I’m 35, because there are fighters out there who are older than me that are fighting at my age or a year younger and they’re doing fine. I would say, yeah I would say it has to be the age. If I have to pin it on anything I would say…but I love this stuff. I love the training, I love all this stuff but maybe the age, I’m at the point where sitting around for a couple of months waiting for your sparring partners to get there…maybe that’s just something I don’t want to do anymore. Who knows? I don’t know. I could have sworn everything was good this last camp but, you know, things ended up that way.”

Do you think that you will ever compete in one of the fast-rising grappling competitions, like Matamoris?

“When it comes to the competition aspect of anything I just love the Ultimate Fighting so much. I’ve been involved with it for so long. I’m just so used to training for a fight, in those ways, you know, it’d be tough to go back to anything else. I’m not totally counting myself out from doing any professional grappling competitions but one thing that would be different is, I wouldn’t train at all for it.”

“I cannot see myself spending money, bringing people down and this and that, for a grappling competition at this point in my life.”

What is the future of BJ Penn?

“I’m going to keep the same fire I used to get to the top of mixed martial arts and I’m going to do all of that with the businesses that I have; with BJPenn.com, with the BJ Penn UFC Gyms. I’m going to keep moving, keep moving forward, putting one foot in front of the other and enjoy my life. Enjoy my family. You know, there’s still a lot of fight left inside of me but I guess that’s where it’s going to stay for now.”

In conclusion BJ had this to say about longtime striking coach, corner man, and friend, Jason Parillo:

“I owe it to Jason Parillo to clear his name. He showed up the week of the fight in Vegas to help corner me. He did not train me in any boxing nor did he help with any game planning for the fight. He did not help or give any advice about cutting the weight or rehydrating myself after the weigh-in. He was only there to be a voice in the corner.”

We would like to sincerely thank BJ Penn for taking the time to share his thoughts with all of the fans here at BJPenn.com and we wish him all the best in his future outside the octagon. We all know you will be a champion outside the cage just as much as he was inside it. Thanks for all the great memories BJ. We look forward to hearing great things about you, your gyms, and your family. Mahalo.