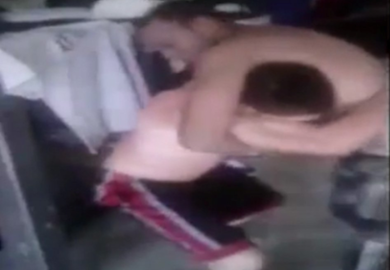 News Oklahoma Breaks It Down:

A grainy video shows two shirtless men surrounded by bunks and several male onlookers in an apparent fight circle. The shirtless men touch hands, raise their fists and start taking swings at each other.

Attorney Louis Bullock said the cellphone video depicts an officer-organized fight at a halfway house the state Corrections Department is in the process of shutting down.

In the video, another man holds what appears to be cash and tells one of the fighters that if he wins he will get paid.

Amid encouragement from those watching, the two shirtless men throw wild punches. One man unsuccessfully attempts to body slam the other before the pair wrestle into a bunk and then the ground. The man on top lands several blows to the other man’s head and kicks him once with a booted foot before other offenders pull them apart.

The fight takes place at the Avalon Correctional Center in Tulsa, operated by Oklahoma-based Avalon Corrections Services Inc., and is at the heart of an ongoing investigation by the state Corrections Department’s internal affairs division, Bullock said.