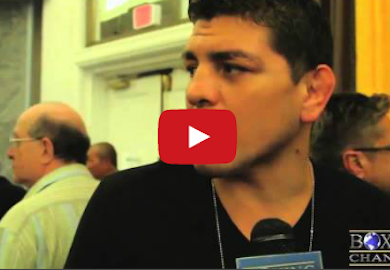 “I just love to watch him [Pacquiao]. I love the way he fights. I try and take what I can. This year has been good to me because I can go out and make a lot of these boxing shows. Usually I have to fight. People don’t think I am a serious boxing fan but most of the time I had 3 to 6 fights a year in a career that lasted 13 years.”

“I’d like to fight for the world title against Johny Hendricks but these guys [the UFC] are kinda holding out. I’m trying to renegotiate my contract and negotiate some fights for this year. I don’t know what will happen, maybe nothing. That’s fine. Either way I can’t complain. I had a good run. I’ve already had 37 fights but I would like to make a boxing run. It is up to Dana White and up to who’s got the real money.”