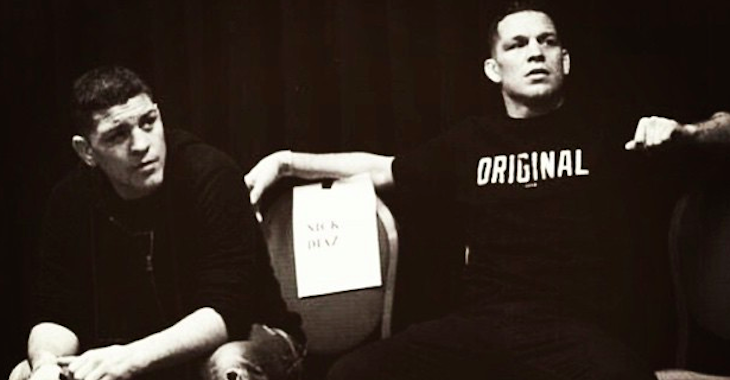 Tempers ran high inside the decagon AND outside, apparently. At one point in the evening, Nate Diaz confronted fellow UFC fighter Khabib Nurmagomedov. WSOF Vice President Ali Abdel-Aziz claims that he saw Nate throw a punch.

“Nate went to Khabib and they just got talking,” Abdel-Aziz told MMA Fighting. “They exchanged words and Nate threw a punch. I saw Nate throw a punch… I consider theses guys friends, Nick and Nate, but I’m very disappointed.”

The first altercation between the Diaz Camp and Nurmagomedov’s crew was caught on camera, but there was apparently another face-off after the show finished.

Abdel-Aziz was put in a difficult position as the Diaz Brothers are his friends, but he also has a brand to protect.

“I don’t know what it is, both of them need to call Dana (White) and talk to him. Maybe they can fight and get over with it, because when people fight, they respect each other. But I’m just not happy about somebody throwing a beer bottle. There’s a lot of kids, there’s a lot of women. What happens if somebody’s face got cut? One of them would’ve went to jail. I don’t want to see Nate or Nick going to jail or their friend go to jail at my show.”

Abdel-Aziz continued, “I can’t have Nick and Nate come to a World Series of Fighting event again,” Abdel-Aziz said. “I like these guys, but if they’re not going to show me respect coming to the show, how can I let them back in?”

Do you think the Diaz Brothers should be banned from WSOF? Share your thoughts in the comment section below!