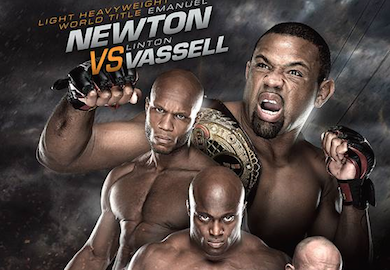 Bellator MMA will put an end to its weekly season schedule on Friday, October 24th as the promotion will return to Wichita, Kan., for Bellator 130 live on Spike TV. The night will feature “The Hardcore Kid” Emanuel Newton once again putting his title on the line against English native Linton Vassell, while Bobby Lashley faces Karl Etherington in a heavyweight clash. The night will also feature the Bellator debut of the top-ranked Marloes Coenen, who battles Italian newcomer Annalisa Bucci. And a Bellator return to Kansas wouldn’t be complete without “The Caveman” David Rickels, who will take on Brazilian Davi Ramos.

The event will broadcast live at 9 p.m. EST/ 8 p.m. CST on Spike TV. The preliminary card will be streamed live and free on Spike.com beginning at 7 p.m. EST/ 6 p.m. CST. Tickets for the event are on sale now and can be purchased at Ticketmaster.com or by visiting the Kansas Star Arena box office.
Fresh off his devastating and now signature spinning back fist victory, Bellator Light Heavyweight Champion Emanuel Newton returns to action to face English native Linton Vassell. Nicknamed “The Swarm”, Vassell enters the fight riding a nine-fight winning streak and is undefeated in Bellator at 3-0. Newton is aware of the tough challenges Vassell creates, but is thankful for the opportunity to get back to into the cage.

“I didn’t feel good about my last performance even though I got the knock out,” Newton said. “I wanted to get another fight as soon as possible so I could put on a better performance for the fans, and Coker, Bellator, Spike and Viacom really made it happen. I have to thank everyone involved and I am ready to put on an awesome fight for the fans on October 24th.”

“This was not an easy road but I’m living the dream right now, it was only a matter of time before I was fighting for the Bellator World Title,” Vassell said. “The time is now and I’m more than ready to be the first British Bellator LHW World Champion.”

After capturing his first win inside the Bellator cage on September 5th, Bobby Lashley is set to return to his home state of Kansas when he takes on the undefeated Karl Etherington on Friday, October 24th live on Spike. Lashley captured his first Bellator win with a rear-naked choke submission over Josh Burns, and is looking to move his record to 2-0 inside the Bellator cage with a victory on October 24th.

The long awaited debut of Marloes Coenen will also be featured on the Spike TV Main Card as the Dutch striker will face Annalisa Bucci in a featherweight affair. Since the arrival of Scott Coker in June, the female division has been reestablished in Bellator and Coenen will look to pick up another huge victory on October 24th.

The main card will be rounded out with a veteran lightweight clash as Rick Hawn returns to his natural weight class to take on Dave Jansen. Away from action for nearly 18 months, Jansen returns to the cage riding a six-fight win streak including an impressive victory over Marcin Held in 2013. With his ACL injury behind him and fully healthy, Jansen is counting the days until October 24th live on Spike.
“I’m ready to showcase my evolving skillset as a fighter and get right back into the mix,” Jansen said. “Rick is definitely a formidable and worthy opponent. I believe that this is a great matchup for me stylistically and I’m looking forward to delivering my best performance to date.”

“I can’t wait to get back into the Bellator cage a face a guy of Jansen’s caliber, he’s a really tough guy, will be a great test for both of us and I’m just ready to put on a great fight,” Hawn said.
The Bellator 130 preliminary card will showcase some of Kansas’s top-talent including, Ricky Musgrave fighting Joe Wilk, Cody Carrillo taking on Marcio Navarro and Daniel Gallemore facing Gzim Selmani.
Fan favorite and Kansas’s own David “The Caveman” Rickels will return to the Bellator cage to battle Davi Ramos. A former lightweight tournament winner, Rickels has tallied 10 of his 15 wins by KO or submission and is ready to put on an explosive fight for his hometown crowd.

The night will also feature the return of top-prospect Darrion Caldwell taking on Anthony Dizy, Nate Jolly will look to grab his first Bellator victory against Aaron Derrow, in addition to former welterweight tournament contender Sam Oropeza fighting Gary Tapusoa and a battle of heavy hitters between Derek Bohi and Alex Huddleston in a heavyweight bout.