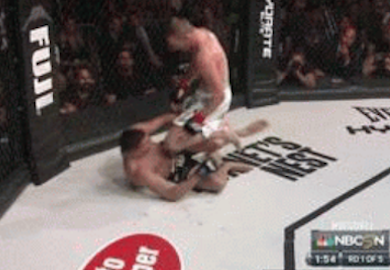 “I’m not saying that I would have won had it not happened. I respect Justin. He’s a great fighter, but I was winning the fight up until it did happen, and it happened, and it changed the fight. There’s no ifs, ands, or buts about it. It was a huge momentum swing. It went from me winning, to me just getting destroyed. I don’t even remember the fight after the knee. I don’t remember anything my corner said to me or anything.”

“We aren’t playing horseshoes over here. It’s a violent sport, and it’s a referee’s responsibility to catch something illegal that could hurt someone. It cost me half my paycheck and it cost me a world title.”

“I honestly think I deserve a rematch, but I am not going to be bitter about.”

“I usually watch where I hit. I am not saying Justin’s a dirty fighter or trying to throw his name in the mud or anything like that. I am just saying he got reckless, hit me with illegal blows and it changed the fight. It went from being someone clearly winning to someone else clearly winning after the knees. I feel like I deserve another chance because the first one wasn’t fair.”

On July 4th weekend, Nick Newell went up against stuff odds and fought for the WSOF work-title. Over the course of the bout he suffered an illegal knee that changed the fights course.

Now, in a recent interview with Sherdog.com, he’s calling for a rematch.  You can see the illegal blow HERE.