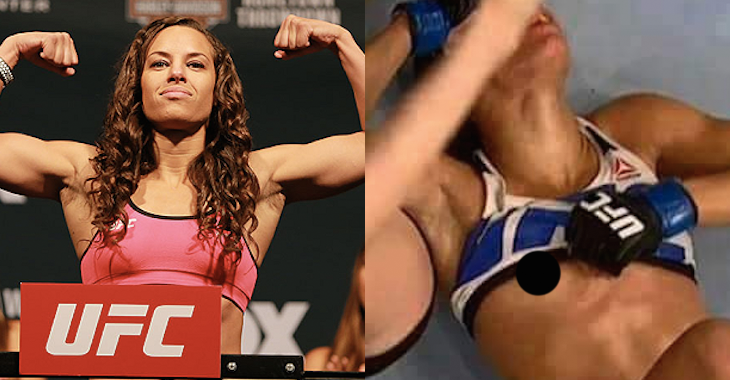 The unveiling of UFC’s new Reebok uniforms has not been well received by fans mainly because they were unappealing to the eye. However after last night, Reebok may have more serious problems on their hands.

Elizabeth Phillips was well on her way to picking up a decision victory against Jessamyn Duke during the UFC Fight Pass preliminary portion of “UFC on FOX 16”. Duke knew she was down on the scorecards and went for broke, and in the process locked up an armbar attempt with seconds remaining. The horn sounded and Duke let go of the hold, revealing the first female wardrobe malfunction in the history of the UFC. Lucky for Phillips, it was only broadcasted on UFC Fight Pass and no FOX. The footage has since been edited out of the archived broadcast. Out of respect for Phillips, we will not be showing an uncensored version of the photo above.

Up until Saturday evening, there had not been a single female wardrobe malfunction in UFC history. The ladies have graced the octagon since 2013 without a worry of anything slipping out, but that could all change now. Is it a coincidence that Reebok’s top was being worn in the first in-octagon wardrobe malfunction? Could Reebok be to blame for this? Share your thoughts in the comment section below!