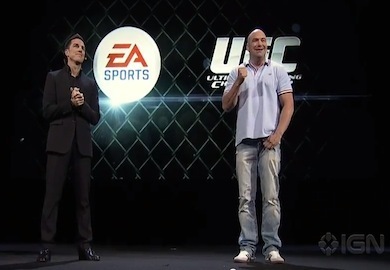 Today, Microsoft unveiled the new Xbox and with it, a plethora of new games and features. One of the new games revealed at the showcase was the new UFC game. This is the first UFC video game made by sports-simulation powerhouse, EA games.

The switch from old developers, THQ, to EA was announced last year at the E3 conference after poor sales and a soon-to-be bankrupt THQ studios. Although ratings for the game had improved with each release, sales never made a profit for the company.

With this, the UFC has promised a long-running line of video games as a legion of fans wait to see what kind of fun and realism that EA can bring to a franchise that has grown stale in just three releases.

EA did have its own MMA game, released back in 2010, but poor sales marred the game that had a wide range of advantages over the THQ versions of the UFC games, yet struggled with a roster that had little to offer.

Now, with today’s announcement, the UFC is hoping to have the absolute MMA gaming experience.

UFC is being released alongside three other EA games and will feature a new gaming engine dubbed, ‘EA Sports Ignite’. This engine is supposed to ‘blur the line’ between the virtual and reality. Also, ‘True Player Morion’ will be used to capture new levels of realism which are supposedly ‘ten times’ more detail and a ‘human-like’ intelligence.

The game, along with the other three sports titles, has been promised to be released within the next 12-months.

Jon Jones and Anthony Pettis were both shown in a video that talked about an athletes mentality. These are the first two fighters (besides a cinematic that featured Benson Henderson receiving the showtime kick) directly associated with the game.

EA has promised that you will see every detail in a game along with even the most minor imperfections of real-life.

For the latest MMA news and updates on the new EA UFC game, visit BJPENN.com