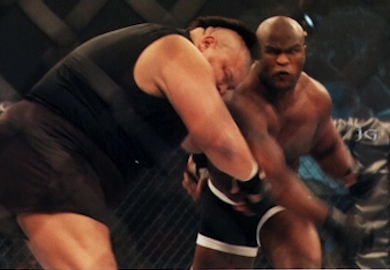 In February of last year veteran MMA Fighter Gary Goodridge (pictured) came out to the media about his Dementia pugilistica (DP), a type of neurodegenerative disease or dementia that may affect amateur or professional boxers as well as athletes in other sports who suffer concussions.

It was a shocker for MMA fans, fighters and analysts who often side with the theory of UFC President Dana White, that MMA is one of the safest sports on the planet. In a sport where the combatants only contest three-rounds, unlike boxing’s twelve-round fights, many believed that the mix of ground and stand-up fighting, combined with short bout times protected the fighters from significant brain damage.

What we all have failed to consider is what happens in the training room.

In a new report coming out of NJ.com, reporter, Matthew Stanmyre of The Star-Ledger casts an eye-opening and scary tale from fighters in the region who are showing early signs of brain damage.

Most within the MMA community are quick to dismiss critics and any suggestion of long-term risks, but a growing chorus of medical experts believes fighters are on course to develop brain diseases similar to boxers, pro wrestlers and football players.

The Star-Ledger’s reporting found several fighters with frightening tales about brain trauma. One fighter, for example, says he slurs his speech for up to 36 hours after sparring sessions. He also was found wandering a department store, oblivious to how he got there. Others tell stories of being dizzy for months after a fight and unable to remember people they’ve met a few days earlier.

On a Tuesday morning this spring around 9, the parking lot behind Ricardo Almeida’s Brazilian Jiu Jitsu Academy in Hamilton begins to fill with trucks and SUVs, bringing some of the fiercest MMA fighters in the world to Mercer County.

The men are a collage of cauliflower ears and muscles, many sporting the angular, broken and re-set noses of veteran fighters. They pair off by size after each man wraps his hands and slides on boxing gloves and shin guards. All of them wear headgear — a sign of the intensity that’s about to come.

A timer is set for five minutes, igniting an orchestra of whacks, bangs and pows.

Almeida, now a retired UFC fighter, says he prefers teaching jiu jitsu to watching the sparring, which he calls “the dark side of the force.”

When he talks about his MMA career, he says, “I never really liked punching somebody in the face. It never really felt like a sport … destroying the other guy’s face.”

He trains about 20 fighters now out of gyms in Newtown, Pa., and Robbinsville, his new home in New Jersey after moving from Hamilton this summer.

In most MMA gyms, sparring generally means anything within the rules: punches, kicks, knees, body slams and sometimes even elbows. But in gyms like Almeida’s where there’s a mostly open-door policy, partners quickly can turn into sworn enemies.

“Sometimes it turns out to be a real fight,” says Tom DeBlass. “All the guys at Ricardo’s, the pro guys, we always spar hard. That’s just what we do. … To be the best you gotta bang with the best.”

In New Jersey, the absence of training regulations means there are no limits on rounds, minutes or punishment fighters take during sparring. There’s no stopping a guy who weighs 250 pounds from sparring someone 100 pounds lighter, or an amateur from being pummeled by a pro.

“I pretty much could say that I’ve knocked out every single teammate that I’ve ever sparred,” says Jose Rodriguez, a New Jersey fighter from 1999 to 2010.

In addition to knockout punches, kicks and knees during sparring can come with a heavy toll.

Charlie Brenneman, a pro who trains at AMA Fight Club in Whippany, had his left orbital socket shattered by a kick during sparring in 2008. Brenneman, who says an injury like his “just comes with the territory,” had emergency surgery and temporarily lost vision in his left eye.

Sullivan, too, has his horror stories. After training sessions, he says, “Sometimes I come home (and) I can’t talk. I’m not going to lie. It’s called being ‘punch drunk.’ You stutter your words.

“I’ve had it last as long as a day and a half. You’re thinking the word, but you just stutter it. You have that slur to you and you’re kind of like hazed. It literally feels like being drunk, only without the nauseous feeling.”

Fighter George Sullivan says he has had his nose broken twice while sparring, comes home two or three times during each fight camp having trouble speaking, according to Rusher, his fiancee.

“He’ll want to say something but his mouth isn’t moving as fast as his brain might be,” Rusher says. “He looks, like, disoriented, like his head is floating.”

During one savage sparring session with a bigger fighter, Sullivan says, his head was rammed through the drywall at Kurt Pellegrino’s Mixed Martial Arts Academy in Belmar, the gym where he now does most of his training. Later that day, Sullivan says, a friend found him wandering through Target with deodorant in his hands.

“I don’t even remember it,” Sullivan says. “I was brain dead.”

That type of punishment can add up, says Pat Miletich, one of MMA’s pioneers as a fighter and then as a trainer and coach. Miletich, 47, started training in MMA in 1992 and says he has seen cognitive changes in some peers.

“A decent number of them are not quite as sharp as they were when they started,” Miletich says. “You can tell that there’s been some effects from the blows to the head, the Pugilistic Dementia and things like that. Some guys have suffered. So it’s there. It’s definitely there.

“They’re just not quite the same guy. Their eyes are not as sharp. Their pupils are different. Now and then they have a blank stare. Things like that where that just wasn’t there a decade ago.”

Back inside Almeida’s, it doesn’t take long to understand why Miletich preaches defense.

DeBlass spars with Neiman Gracie, a burly young fighter. The session quickly turns into a brawl. DeBlass and Gracie throw heavy punches and kicks, faster and faster, harder and harder.

Under pressure, DeBlass launches a front kick that drills Gracie in the mouth, opening a 2-inch gash under his bottom lip. Blood splatters Gracie’s T-shirt, DeBlass’ arm and the blue mats.

Gracie is sent for stitches and DeBlass immediately finds another sparring partner. He goes three more five-minute rounds and then is introduced to a newcomer at the gym.

Three days later, DeBlass takes a phone call from that same newcomer, the person he had talked with for about 10 minutes at the end of his sparring session.

DeBlass has no idea who the person is.