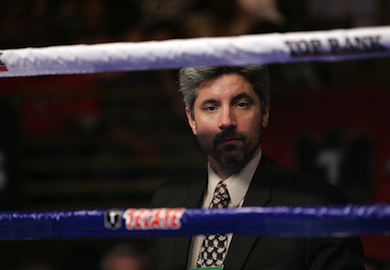 With all the recent scoring issues in Mixed Martial Arts, many have looked at an open scoring model to possibly repair today’s ongoing issue of erroneous judges decisions.

Much like a basketball or baseball game, open scoring would allow everyone witnessing the contest (in this case, fighting) to visibly see each judges scorecards throughout the bout.

“First of all, you could have people throwing beer bottles and all that,” Kizer said. “Secondly, even if they don’t throw beer bottles, the judges – and I’ve talked to some of them about this – they’d be afraid. They’d be looking behind them during the next round. Then the rest of the fight after that, there’s the potential for the judges to be distracted.”

There’s also the potential for the judges to be influenced by hearing one another’s scores, Kizer said. If you’re a judge who scored the first four rounds for one fighter while your colleagues have it more evenly split, “There’s going to be some pressure on you to feel like you should give the fifth round to the other guy.”

The other concern is how it might affect fighters, and our perceptions of them. Forget about them playing it safe in the final round. Many of them already do that when they know they’re ahead, Kizer said, “But so what? They take a knee in football. It’s part of sports.”