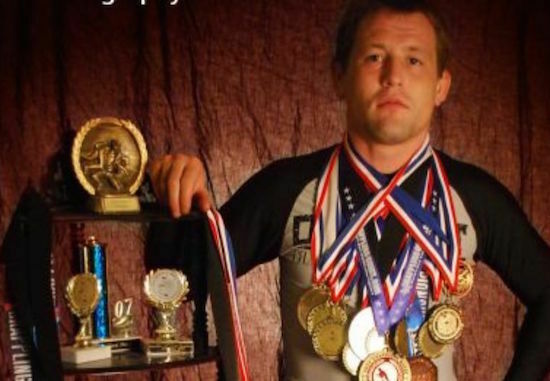 The world of Mixed Martial Arts has embraced the growing list of disabled combatants who want a shot inside the cage, with open arms.

Nick Newell, a one-armed fighter, most recently fought for the WSOF lightweight world title on NBC, which is a major showing for the disabled community, on a very large stage.

Now, in a report coming out of Bloodyelbow.com, a one-legged fighter, who says he fights with a third, is embarking on his own journey, and it all starts with his new Legacy FC deal.

…[Matt] Betzold (pictured) is continuing his assault on the able bodied in MMA this coming February, when he debuts for Legacy FC. He’s set to make his debut February 27th against a yet to be named opponent, MMAJunkie reported the news.

Betzold lost half of his left leg at the age of 6, after being poisoned by a lodger, staying with his family. Since then, he’s gone on to a decorated grappling career, eventually transitioning into an amateur MMA career. He went pro back in 2009. After a rocky 2-3 start as a pro, he’s gone on to win his last four straight, while that hasn’t been against the highest caliber of competition, it was enough to get him onto one of the larger stages for regional MMA in the US.

Here’s what he had to say about his motivation to fight, when he spoke to MMA Sentinel back in May:

And about his difficulty in finding fights on the regional scene:

I would have more fights and more wins on my record, but the fact of the matter is guys are scared to fight me. I get fights set up and then the week of the fight, someone will pull out. That or they accept the fight for a few days, then they pull out. These guys are a bunch of pussies. I thought we were all supposed to be fighters. That’s what I’m dealing with.

Now that he’s with Legacy that second issue should hopefully go away. They have an excellent track record of getting their fighters booked competitively, so more likely than not, Betzold will get the step up in competition that he’s looking for. Keep you eyes peeled for him, this February on AXS TV.