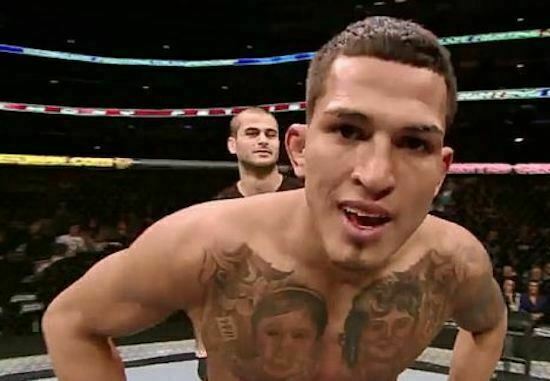 Ahead of UFC 181 tonight, many critics have put UFC lightweight champion Anthony Pettis under fire for his lack of fighting. Pettis hasn’t fought since defeating Ben Henderson for the belt in August of 2013, over a year ago.

Pettis outlined his plans for 2015, and what he wants to accomplish in the new year.

“That’s what’s happening in 2015. That’s my big goal. Making sure we get all of the doubters out of the way. They haven’t seen me fight in a while so they forgot what happened. December, I’m going to start it off strong. Get another one in March or April and then July or August and then finish the year strong in December. If I can run a year like that, my name will be up there for sure.”

“I for sure know I’ve got the potential to run this division for a long time. At the same time I’ve had these injuries. It sucks. I train hard. My style’s very dynamic so I train the way I fight. I’m not going to change it up. That’s how I like to fight. I’m not going to go into my training camps afraid to hurt myself because I don’t want to be injured for the next fight. I’m going to go out there and do what got this belt around my waist. A little safer as I’m getting older. I think I’m due to a good four or five fight streak. It can only get better from here.”