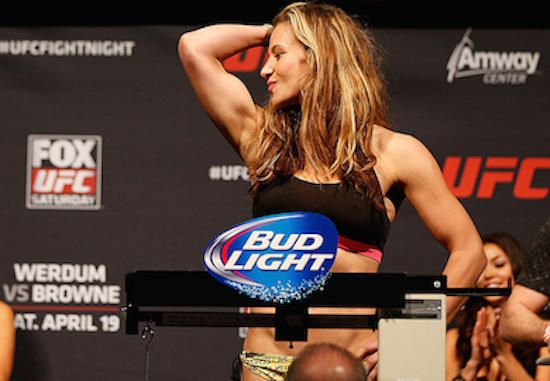 Miesha Tate recently signed to fight Sara McMann at UFC 183. Tate believes that a fight with McMann would give her a better shot at getting back to title contention than a fight with Bethe Correia, who Tate wanted to fight at one point.

Tate spoke to MMAJunkie about the decision to fight McMann.

“I’ve told the UFC I just want to get back up there to be the No. 1 contender and getting back into that title realm, and whoever they want me to fight to do that (is OK),”

“I definitely have some interest in fighting Bethe because she has a little bit of a loud mouth and she seems pretty cocky, but Sara McMann, I’m No. 2 and she’s No. 3 in the rankings. She probably does more for my career at this point by beating her; she’s an Olympic silver medalist in wrestling, so it says a lot beating someone of her caliber.”

“I think she just has that big-headed mentality to think anyone that wants to fight her is her enemy. For me, it’s not that. It’s just that I think she’s up and coming, she’s undefeated. It would be a great fight, stylistically. I really wanted like an exciting style matchup, because the last two fights, it’s a two-to-tango thing. If someone just wants to hold on to you, it makes it a little bit harder (to have a good fight). It does make it harder than someone who wants to engage on the feet and is willing to do everything.”

“I think Bethe is well-rounded and is willing to do everything. Calling her out is more a compliment, but I think she took it as, ‘Oh, you think you can beat me.’ Well, I think I can beat everybody, so that’s no surprise.”