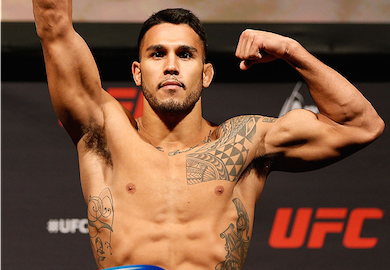 Nate Marquardt (33-13-2 MMA, 11-6 UFC) returned to the middleweight division this past June, where he scored a “Performance of the night” submission win over James Te Huna at UFC Fight Night 43 in New Zealand. Prior to that, Marquardt had dropped 3 straight fights at 170-pounds, including back-to-back knockout losses to Jake Ellenberger and Hector Lombard.

Meanwhile, Hawaiian-native Brad Tavares (12-3 MMA, 7-3 UFC) will be looking to rebound out of 2-fight losing skid when he faces Marquardt this June in Sin City. After stringing together 5-straight octagon victories, Tavares has since dropped back-to-back fights to Yoel Romero and most recently Tim Boetsch.

Who do you have winning this middleweight bout? Sound off Penn Nation!