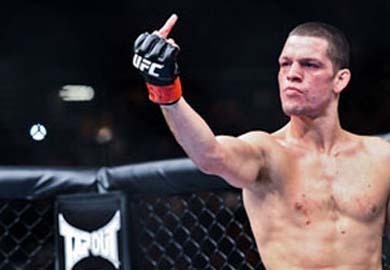 However, on Sunday, Nate Diaz tweeted that he wasn’t interested in a rubber match with “The Bully”, mainly because he has his eyes set on the newly crowned UFC lightweight champion Anthony “Showtime” Pettis:

UFC matchmaker Joe Silva may have a slight problem with Nate’s most recent request, mainly due to the fact that Diaz is coming off back-to-back losses.

After stringing together three straight wins over opponents Takanori Gomi, Donald Cerrone, and Jim Miller, Nate was given the opportunity to fight then-champion Benson Henderson for the UFC 155-pound strap at UFC on FOX 5 in Seattle. Unfortunately for Diaz fans, Nate was smothered by “Smooth” that evening and ended up losing via unanimous decision.

Diaz was then pitted agaisnt former Strikeforce lightweight champion, Josh Thomson, at April’s UFC on FOX: Henderson vs. Melendez event in San Jose, California. Diaz would lose that fight via TKO, due to a head kick and then punches, marking the first time that the Stockton native had been stopped by strikes in his career.

Diaz will likely have to defeat Maynard and then another 155-pound top contender before being considered again to challenge for the UFC’s lightweight title. For now, the UFC plans on giving the next lightweight title shot to Canadian T.J. Grant, who TKO’d Gray Maynard in the first round of their fight at UFC 160.

All that said, I would personally love to see Diaz and Pettis square off sometime in the future.