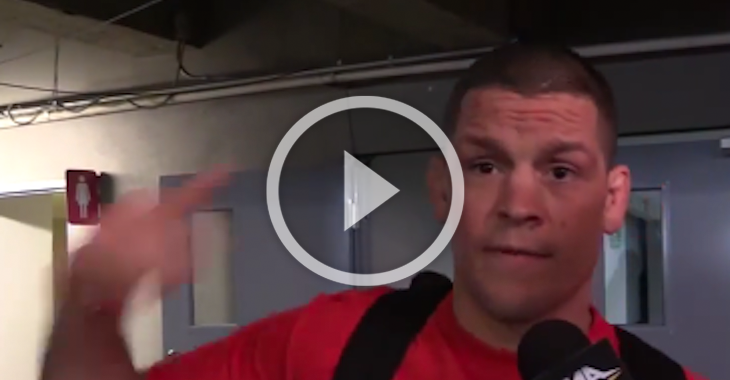 UFC favorite Nate Diaz has been missing from the octagon for quite some time, but he recently made an appearance to call out Eddie Alvarez on his win at “UFC 188”, then proceeded to challenge Alvarez and Anthony Pettis.

“I think Gilbert Melendez won round one, and round two. I don’t think Alvarez did much of anything,” Diaz told MMAFighting. “So, I don’t know how he won that fight. He broke his whole s***— his whole face is broken… I think Eddie Alvarez went to the hospital. You tell me who won that fight. I don’t understand how it works, but I guess that’s just the name of the game. But that little b**** said he wanted to see me next, too! He said that [at the weigh-ins], that he wanted to see me next.”

When asked if he would take the fight against Alvarez, Diaz responded, “Does he want that? Obviously not. He’s at the hospital.”

Eddie Alvarez suffered a busted nose during his fight with Gilbert Melendez and at the end of round one, he blew the blood out of his nose. As Joe Rogan explained on the broadcast, fighters who break their nose should never blow out of it as it will cause their eye to swell up badly. Alvarez’s eye swelled shut almost immediately which made for a rough second and third rounds.

Still, Alvarez pushed through the pain and took the second and third rounds in two judges’ scorecards to earn a split decision victory. Diaz closed his thoughts on the fight, backing up his friend Melendez to the end.

“Eddie Alvarez didn’t win the fight at all.”

When asked if he was going to fight again this year, Diaz said, “If one of ya’ll want to man up! Little Anthony Pettis or little f****n’ Eddie Alvarez— any of you guys wanna man up and fight the real fighters, then we can get it.”

Who do you want Nate Diaz to fight in his octagon return?