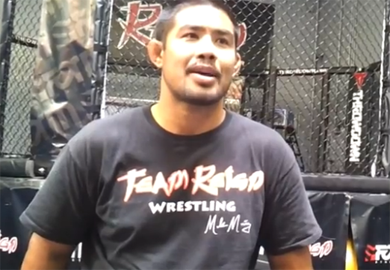 “I’ve always wanted Michael Bisping, not because I have any personal issues or beef with him, but he’s always been at the top. We were supposed to fight, and I know Kennedy has been calling him out and wants to fight him, but I feel we’ve got unfinished business to take care of. I think he’s been a top, perennial contender for a long time, and a win over him would definitely get me back in the mix. So, he’s there. But really, I’d fight anybody in the top 10. For me, I’m a competitor. I want to get to that top. I want that title shot.”

Mark Munoz is sitting on the sidelines waiting for his return to action.

Atop of list of potential match ups is one that eluded him prior. A fight with Michael Bisping.

The two middleweights were originally scheduled to face off in October, but an eye injury forced Lyoto Machida in for Bisping against Mark.