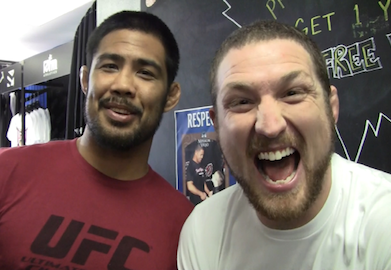 Mark Munoz has served as one of Millers closest friends and training partners for the past several years, but after an attack on twitter and with all the recent events, Munoz was forced to make a choice and he chose to remove ‘Mayhem’ from his life.

It all started when Miller said the following: “You are such a *******@markmunoz how do you expect to do anything with your life other than be your wife’s gimp?” he tweeted.

Mark took to a recent interview with MMAWeekly.com to dive deep into his strained relationship with the embattled fighter.

“It is personal,” Munoz said when asked about their tenuous relationship. “But I will share this: I tried to help.

“Unfortunately, I do own a business. If I didn’t own business… there were decisions that needed to be made to keep the integrity of my business and those were some of the things he referenced in those tweets – that, and that I always said I was going to be there for him. So things went south from him there, and I tried, I really tried. There’s definitely consequences for your actions, and that’s something he needs to know.

“But I do have people to protect. I have people and a business I need to provide for, and there are decisions that hade to be made. I wish that it was different, but it’s not. I hope the best for him, but at the same time he’s been in trouble with the law on a number of occasions and it’s a direct reflection of the behaviors he’s been doing.

“I always say, ‘You reap what you sow.’ If you sow bad deeds, you’re gonna reap bad things; it’s not complicated. I truly hope he turns a corner, or changes something, because he’s been referencing verses in the bible a lot. Hopefully he really does something and has a change of heart about some of the things he’s been deciding to do. I pray for him, I think about him a lot, and I truly hope the best for him.”

“The fact of the matter is, I truly care about him. You know, he gave back to me when we were training here,” recalled Munoz.

“There was a time when he was on The Ultimate Fighter and I was training for Demian Maia at the time. Well, he told the UFC, ‘I need to be here for Mark’s training camp.’ I’m like, ‘No! You go ahead and take this opportunity, because this opportunity is there for you, you do it. If not, they may get a different coach.’

“And he told the UFC, ‘No, I want to be here for two more weeks until Mark’s fight.’ And he did. And yet, he was still able to coach The Ultimate Fighter, but there was a chance someone else would get to be a coach. So there’s things he did… he was a great training partner to me. He showed me a lot of things. And I was able to reciprocate that and show him a lot of things. And I considered him a true friend, and I still care about him.”

“You can lead a guy to water, (but) you can’t force him to drink,” said Munoz.

“He knows what to do. He’s not a dumb guy. He’s very smart. He’s very bright. I just hope he makes decisions that actually improve his future.”