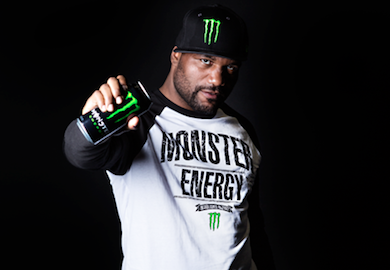 On Friday, February 28th, live on Spike TV, the alliance formally kicks off during Bellator’s Season 10 Premiere from the Mohegan Sun Casino in Uncasville, CT. Monster Energy will be strategically integrated throughout the Bellator live event experience. Monster will own highly visible inventory inside the Bellator cage and activate at various consumer touch points in-arena. In addition, Monster is extending their Monster Girl program with a marquee position in sponsoring the Bellator Girls.

Monster has also expanded its athlete roster with the addition of MMA icon Quinton “Rampage” Jackson to their stable of sponsored athletes. The Monster logo will be featured prominently on Jackson’s fight gear as “Rampage” prepares for his February 28th Light Heavyweight Tournament debut.

“When sponsorship opportunities arise like the Monster Energy alliance, fighter involvement is paramount,” Bellator Chairman & CEO Bjorn Rebney said. “Bellator’s talent connects with Monster’s brand identity and as this partnership continues to develop, you will see more Bellator fighters have the opportunity to be involved with the Monster Energy brand. This benefits our fighters both financially and from an exposure perspective. It really is a win-win for everyone involved.”

To complement the live event experience, Monster and Bellator will look to engage in a multi-faceted activation plan intended to build customer loyalty and drive tune-in of the Bellator broadcast on Spike.

“As Monster was looking to extend its sports platform and build equity within MMA, there was no other choice than to partner with Bellator,” said Cody Dresser, Director of Action Sports at Monster Energy. “From Bellator’s talent roster, national platform, global reach and the Bellator girls, the alignment was purely endemic. Couple Bellator’s strengths with the power, reach and digital prowess of the Monster brand, and the sky is truly the limit.”

“Monster Energy is a global brand that will have great impact throughout all aspects of Bellator live events and programming as our official energy drink partner,” Rebney said. “Monster Energy is seamlessly connected to the male demographic that consumes Bellator on a weekly basis. The synergy in both brands is dynamic and our fans will experience a unified integration between Monster Energy and Bellator beginning on February 28th and over the coming year.”