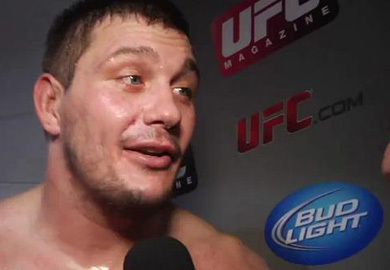 Yesterday UFC heavyweight fighter, Matt Mitrione, appeared on “The MMA Hour” and while on the air gave his thoughts on transgendered fighter, Fallon Fox.

“Because she’s not a he. He’s a he. He’s chromosomally a man. He had a gender change, not a sex change. He’s still a man. He was a man for 31 years. That’s a couple years younger than I am. He’s a man. Six years of taking performance de-hancing drugs, you think is going to change all that? That’s ridiculous. That is a lying, sick, sociopathic, disgusting freak. And I mean that. Because you lied on your license to beat up women. That’s disgusting. You should be embarrassed yourself. And the fact that Florida licensed him because California licensed him or whoever the hell did it, it’s an embarrassment to us as fighters, as a sport, and we all should protest that. The woman that’s fighting him, props to you. I hope you beat his ass, and I hope he gets blackballed and never fights again, because that’s disgusting and I’m appalled by that.”

When the UFC was informed of his statement, they immediately took action, suspending his contract and releasing this statement to Bloodyelbow.com.

“The UFC was appalled by the transphobic comments made by heavyweight Matt Mitrione today in an interview on “the MMA Hour”.

“The organization finds Mr Mitrione’s comments offensive and wholly unacceptable and – as a direct result of this significant breach of the UFC’s code of conduct – Mr Mitrione’s UFC contract has been suspended and the incident is being investigated.

“The UFC is a friend and ally of the LGBT community, and expects and requires all 450 of its athletes to treat others with dignity and respect.”